The Carthusian Monastery of Escaladei stands at the end of a valley, nestling beneath the Montsant hills. In this quiet spot the Carthusian monks followed a way of life marked by silence and prayer, combining the solitude of the hermit with the shelter of community life.

The Carthusian Monastery was founded in 1194, thanks to a grant by King Alfons I to settle population in lands which he had just conquered. Later donations and purchases made the monastery a great feudal lord, owner of a large territory equivalent to the present district of El Priorat.

Escaladei was the first Carthusian Monastery on the peninsula and took part in the foundation of many later ones. The prestige and influence it enjoyed, with the revenue from its considerable estates, allowed Escaladei to live a period of splendour between the 16th and 17th centuries. That allowed the Carthusians to undertake a sweeping architectural refurbishment, decorated with works by the famous Escaladei school of religious painting.

From the first half of the 19th century the confiscation of lands belonging to the Church, combined with the looting that took place during the popular uprisings led to the abandonment and deep degradation of the complex. Now, however, the latest restoration work has brought part of that splendour to light. It can be seen in the recently opened  area where community life went on.

Instructions for making bookings and for guided tours at the Charterhouse of Escaladei.

Activities for the general public. Check out our guided tours program in the highlights section or ask for more information on tel. 977638556 or e-mail to reservesmonuments.acdpc@gencat.cat

Visits for groups or individuals who wish a private visit with one of the guides of the monument. You can make the booking of your visit on tel.: 977638557 or e-mail reservesmonuments.acdpc@gencat.cat

The facilities are not equipped for people with disabilities 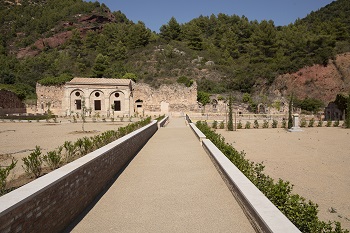