From Wednesday to Sunday, including public holidays

Claramunt Castle stands on a hill overlooking the Òdena basin. Its history, marked by wars, is a series of destructions and reconstructions, but despite everything its structure and impressive appearance as a fortress have been conserved until today.

Founded in the second half of the 10th century, it was one of a dense network of castles that marked the boundary between the County of Barcelona and Al-Andalus, designed to protect and organise the territory.

The castle was entrusted to the house of Claramunt, who held it in their domain until the 11th century. Later it came into the possession of the House of Cardona, who made it the administrative centre of the rule of the Cardona-Medinaceli over the lands of the Òdena basin, except for Igualada. With other nearby castles Claramunt remained under the jurisdiction of the lineage until it died out.

Witness to countless wars, the fortress has been demolished and rebuilt on several occasions since 1463 when, in the war between Joan II and the General Council, it was badly damaged for the first time. After the war, Joan Ramon Folc III de Cardona ordered the rebuilding of the castle, and work continued until the 16th century. But in 1714, after the War of the Spanish Succession, it was partly pulled down and was never again inhabited.

The fortress conserves the classic structure of a 12th century castle, divided into two precincts separating the residential part, with the hall and the keep, from the lower precinct, where the maintenance services were housed. Today it looks like a great courtyard surrounded by walls.

Closed on Mondays and Tuesdays except public holidays, 24, 25, 26 and 31 December and 1 and 6 January.
Access to the castle is to walk (25 min duration approx.)

Length of the visit: one hour

The facilities are partially equipped for people with disabilities and the blind.
If any person with impaired mobility wishes to visit the fortified site, a key can be requested to open the vehicle access chain across the route up to Claramunt Castle. This request must be sent in writing to the Town Council (claramunt@diba.cat) and a confirmation reply awaited.

Where to eat and sleep 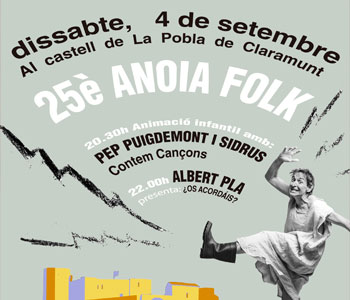